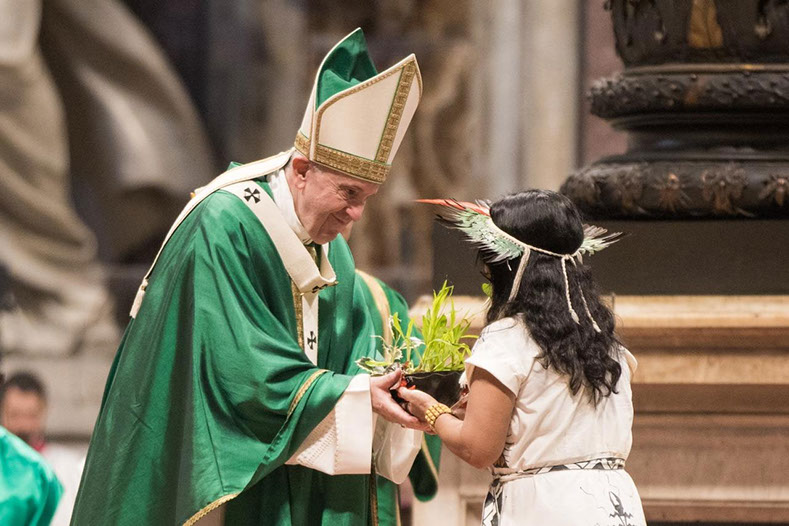 Pope Francis’ Querida Amazonia – Beloved Amazonia - has been warmly received by many members of the Aboriginal and Torres Strait Islander Catholic community. The tone of the exhortation is reflective of the position that underpins our vision for the Church in Australia – a Church that is open to the gifts of First Nations Catholics, honest to the past and embracing of a new way of thinking that utilizes the principle of subsidiarity.

Please note that we have not covered the environmental aspects of the Exhortation. Our commitment and care for the land for thousands of years is our continuing legacy and the Council supports all efforts to care for and sustain Mother Earth. We stand alongside our Amazonian brothers and sisters in their struggle for their culture, land, identity and survival.

It will take some time to ‘digest’ and fully understand the implications of Beloved Amazonia but the synod and accompanying document are all leading us to a pivotal time in the global Catholic Church – and particularly the Australian Catholic Church. The Church in our Great Southern Land is currently undertaking a Plenary process that carries the hopes and dreams of the 130,000 Aboriginal and Torres Strait Islander Catholics.

Many had expected Beloved Amazonia to include a definitive statement on the issue of accepting married men into the Priesthood to address the needs of remote Amazonian Indigenous communities – drawing obvious parallels to the needs of our communities in Australia. Instead the Pontiff espoused “a specific and courageous response is required of the Church” to meet the needs of Catholics. Some have seen this statement as an attempt to obviate further difficult discussions, however those of us involved in the National Aboriginal and Torres Strait Islander Catholic Council (NATSICC) feel it is reflective of the need to take a wider perspective and consider options and avenues that have not yet been fully explored.

A point that is often lost in these discussions is to acknowledge the commitment and dedication of the Priests and Religious that are currently working with Aboriginal and Torres Strait Islander people in urban, regional and remote settings. Everyday these Priests work tirelessly in communities with very little respite. They are owed a debt of gratitude.

Undoubtedly, having Aboriginal Clergy would embody Catholic Social Teaching’s Principle of Subsidiarity, a teaching that NATSICC and the Catholic Church subscribes to and strives to bring to life. Subsidiarity advocates that those closest to the community and the issues faced should be empowered to make decisions and become leaders. In doing so we embrace the value and the transcendent worth that comes from God in each and every individual. But it cannot be seen as the only way to empower our people.

This single course of action alone ignores and minimizes the important roles of women in our communities, families and Aboriginal and Islander Catholic Ministries (AICMs) in Australia.  Just as cultural responsibilities may deter SOME Aboriginal men from becoming Priests in SOME communities (but not all), we are culturally and morally bound to respect and revere our matriarchs. Additionally, Aboriginal Deacons have long been revered and integral to Aboriginal Catholic Communities alongside our young people (both male and female) that culturally become leaders within families. The empowerment of women and youth is a ‘courageous response’ to Subsidiarity.

Whilst we encourage and would welcome Aboriginal Priests, the Ordination of married Aboriginal men alone will not make the “Church fully the Church that Jesus wants her to be” – as per St. John Paul II’s address to Aboriginal and Torres Strait Islander people in 1986 . Standing alongside thousands of others in Blatherskite Park in 1986, I witnessed and absorbed the then Pope’s words and was filled with hope and joy for a united future. We waited upon his every word that day and the bus back to Adelaide was filled to the brim with discussions of the possibilities that lay before us. As we barreled through the desolate bush back home, we concocted plans for what was to become the new home of First Nations Catholics in South Australia – the Aboriginal Catholic Ministry in Adelaide. We didn’t need a roadmap or Strategic plan laid before us, all we needed was hope and a sense that our culture and point of view was valued and respected.

A living example of Aboriginal and Torres Strait Islander leadership in communities was recently shared at the Catholic Youth Gathering. The Parish Priest of a remote Aboriginal Community was trying, unsuccessfully, to get young people to attend Mass. Many initiatives were attempted, resulting in only one young Aboriginal leader accepting the invitation and becoming a Mass regular. He began ‘dressing up’ for Mass and changing his route to the Church so that he would walk past his mates on the way. One by one, and week by week, a new ‘pilgrim’ would join the procession to Mass. Witnessing a peer, friend and respected member of the community showing leadership through action planted a seed of hope in the community. It is this concept that we need to nurture in “a specific and courageous” way – the concept that Aboriginal and Torres Strait Islander people have the capacity to lead and possess gifts of Faith, perseverance and Culture that will enhance and strengthen an authentic Australian Catholic Church.

We need to see all Aboriginal and Torres Strait Islanders as leaders and role models in our Church. We need to look beyond the obvious because, as Pope Francis writes “the real response to the challenges of evangelization lies in transcending the two approaches and finding other, better ways, perhaps not yet even imagined.” There is not simply ‘Aboriginal way’ and ‘Catholic way’, there is something in between where each strengthens and lifts the other. This is the Church that we imagine.

The Australian Catholic Bishops Conference support of NATSICC is emblematic of that concept. We are working together to strengthen the roles of Women in Leadership, support our young people in their struggles of faith and survival and include First Nations people in Decision making. Collectively, one of our greatest challenges is to inform and educate the mainstream Church of our gifts and our readiness to share those gifts.

The discussions following Beloved Amazonia should focus on “Specific and Courageous” ways that Australia can be home to a more Authentic Australian Church augmented and enriched by Aboriginal and Torres Strait Islander Culture. The 2020 Plenary is an opportunity to discuss and explore the opportunities that we have as a nation to embrace all voices within the Church.

All Aboriginal and Torres Strait Islander Catholics in Australia are echoing Pope Francis and asking all Catholics to be courageous, be governed by the Holy Spirit and be present to support us on our journey with the Australian Catholic Church.