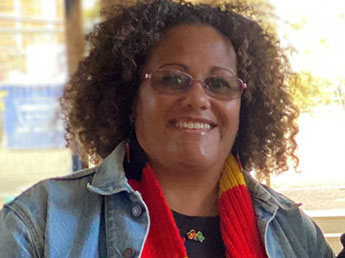 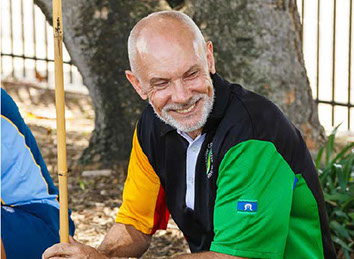 Sue was nominated by the Catholic secondary colleges of Geelong – St Joseph’s, Sacred Heart, Clonard, St Ignatius and Iona for her tireless work with their Aboriginal and Torres Strait Islander students.

Susan’s generosity and vulnerability in sharing her – and her family story – of being part of the Stolen Generation has led to an emotional awareness that this is not a far away story, removed from our communities and that many Australian families have endured much pain and trauma as a result of these policies.

“It was an incredibly difficult time for our communities and it was Aunty Sue who demonstrated immense strength, love and courage to provide comfort and support.” The schools noted in their nomination.

Susan is an integral figure in the lives of young indigenous people in the Geelong schools and the school communities are so grateful and blessed to have her support.

Nominated by Ryan Catholic College in Kirwan, QLD, Karl McKenzie is currently the Chair of the Ryan Catholic College Indigenous Education Advisory Committee and plays a key leadership role and has done for many years. Karl no longer has children attending the College but regardless is always prepared to give of himself for the Common Good.

Karl highly values and in turn is highly regarded for his contribution to Catholic education as a key agency of change within the Catholic Church. “Karl the supports the spirituality of the College from both Indigenous and Catholic perspectives.” explained Ryan Catholic College in their nomination.

In a wider context, Karl plays an important role by participating actively in the Ministerial Region of the Good Shepherd Worshipping Community and lives the Gospel Values of compassion and respect for all.

Karl fosters leadership in both of the Advisory Committee members but has played a role in ensuring the student voice sits around the table and their voice is heard. Karl works closely with the College Indigenous Education Team and in particular with our Coordinator and male school officers. Karl also plays a leading role in the Boys Yarning Circle.

Karl’s calm demeanor, reference to the face of Christ in all, and skill set all form part of the special gifts that he shares with the community. 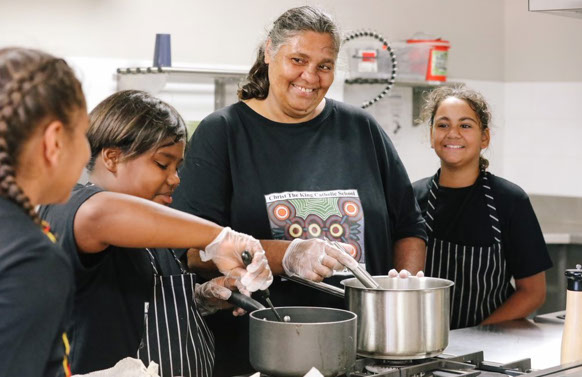 In their own words, Christ the King School in Broome best sums up the reasons that Philomena is a recipient of this year’s Adult Award:  “Mena is dedicated a member of the local Catholic Community in Broome and follower of Jesus is her personal and professional life. She demonstrates authentic discipleship through her care and love of all in the community going above and beyond her job description.” Philomena works at the school as an Aboriginal Teacher Assistant and 0- 3 Playgroup coordinator but also shares her Gospel values in her personal life where she fosters children, organizes community events and takes an active role in the decision making of the local community in her role as acting chairperson on the community board. She is an exemplary Aboriginal woman and an exceptional role model to all in the community. She inspires all young people and young adults to value education and Catholic faith formation. head of the Parents and Friends and Parish council she instills the Gospel values in all decision making with a strong focus on culture, language, traditions, respect and the dignity of each person. “Mena has made a huge impact on our Catholic school and has made a significant impact on many of the lives of people in our local community.” Said Sharon Del Ray – Principal of Christ the King School. The 2021 NATSICC Service to Community Award is not the first accolade that Philomena has received – she was also the winner of the prestigious Kate Mullan Award for 2020, and she continues to inspire and lift the profile of Aboriginal children, adolescents and adults in the community.  Reg Carnamah ​ 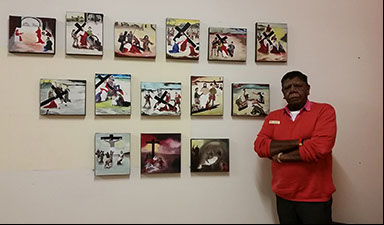 Reg Carnamah is a Pastoral Worker at the Aboriginal Catholic Ministry (ACM) in Perth and has worked in this position for over 12 years and is a recipient of the Adult 2021 NATSICC Service to Community Award. He is well respected in the Perth Archdiocese due to his commitment to his work. Over the years Reg has been drawn to learning about, reading and discussing the gospel stories and  his has had a profound effect on how approaches his work. Reg visits the Aboriginal community at home and in three of the major hospitals in Perth. During these visits, in his own way, he tries to model, share and encourage Gospel values to others. As a member of the ACM team Reg performs the duty of acolyte at all the ACM Sunday Masses, the Annual Archdiocesan Aboriginal Sunday Mass and the monthly Mass celebrated with Clontarf Aboriginal College Boarders. Reg has been given permission and is now in the process of consolidating his skills and confidence to lead funeral services in the Peth Archdiocese. In 2020 Reg trialled a program "Seniors on the Move" which aims to connect seniors through outings, yarning circles and other activities. One of Reg's hopes is to inspire other men, especially young men to share their story because during all the challenges that Aboriginal men face there is always hope which is found in the sharing of story. In 2020 during the COVID Pandemic Shutdown Reg's 'working from home project’ was to paint the Stations of the Cross based on his personal story. There was much interest and encouragement from the ACM team and the interest grew when key people in the Archdiocese heard about the project. On completion of the project Reg’s story is now available as a resource booklet, a YouTube clip and a podcast. Gradually as people hear his story the interest and awareness of Reg's story is growing. It is a story that also reflects the story of many Aboriginal people. This project has provided a rich opportunity for Reg to grow both personally and spiritually.  Project video - https://www.youtube.com/watch?v=pJzAZotkRoU 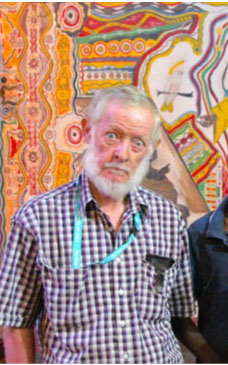 Br Vince Roche has lived for almost 40 years in the remote communities of Wurrumiyanga on the Tiwi Islands but mostly at Wadeye (Port Keats). This year 2021 marks 40 years since the Christian Brothers began ministry at Wadeye. In many ways his constant and faithful service goes unnoticed but the people of Wadeye hold Vince in the highest esteem. He initially taught at the schools in the communities. He later moved into Adult Education programs. He has been a crucial contact person for families who have had their children attend boarding schools interstate such as Worowa Aboriginal College in Vic Vince is always available to the many people who knock on the door of his house and he inspires all of us with his consistent and quiet service of all who come his way. He is a trusted advisor to many and he continues to assist people with the challenges experienced in remote communities where his knowledge and experience with application forms for setting up bank accounts, mobile phones and tax payments and the demands from Government bureaucracies are treasured. The Church leaders at Wadeye have nominated Br Vince for this award.   Fr Leo Wearden 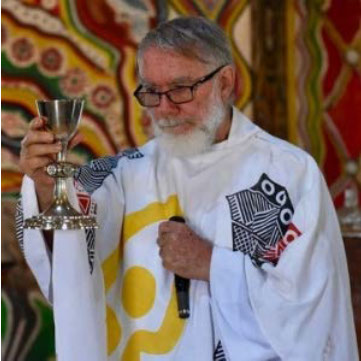 Fr Leo has been Parish Priest at Wadeye for around 15 years. Previously he was on Bathurst Island for 10 years. He is totally committed to making Jesus present in the Indigenous Communities of the Northern Territory. He is a kind, generous and respectful man, sensitive to the cultural needs of the people, and humbly walks with them in times happy and sad. He has been invited by Traditional Elders to say Mass and bless the candidates for cultural ceremonies. This is an indication of the high esteem in which he is held by the community. He will often be invited to say a home Mass on occasions of bereavement and anniversaries. Father willingly celebrates Mass on homelands, at the local school on special Feast Days. He has learned the local language, and leads prayers and sings in Murrinhpatha. During a recent period of ill health, the people missed him greatly and greeted his return with banners and songs of welcome. Sr Kerry McDermott 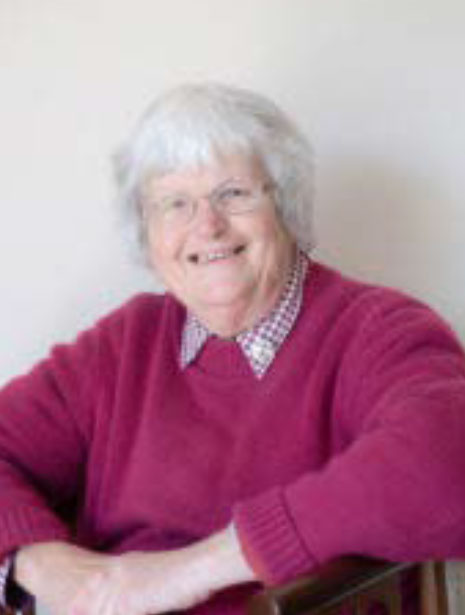 While it could be true to say that she lives her life in the service of the Aboriginal and Torres Strait community, Sr Kerry’s life is more than that, she simply lives her life with the community she knows as her friends and neighbours. In this, she is truly Jesus made present to others. Sr. Kerry is a gentle but very strong leader. She advocates for justice and encourages those around her to live justly. She is a spokesperson for those who have no voice, but more than that, she encourages their voice. She challenges the status-quo and expects that anyone can be a leader. It is important to note that Sr. Kerry, while being guided at all times by her Order’s ministry of service to others, is first and foremost guided by the advice of the Elders of the community. A tireless worker in the Holy Family Parish, Ingleburn, Sr. Kerry is based at a humble, little secondary church- Holy Trinity at Minto which has been her spiritual home, andthat of the Aboriginal Catholic Ministry for many years. Once a month is an Aboriginal Mass is held with participation by the community as readers and Eucharistic Ministers and frequently babies are Baptised during the Mass. It is a joyful occasion with so many reflections of Catholic, Aboriginal life, including hymns, cloths, flowers, candles and paintings. The presiding Priest is usually theChaplain to the Aboriginal community, guided and mentored by Sr Kerry. Sr. Kerry has been instrumental in the formation and continued work of the Winga Myamly Reconciliation Group. ‘Winga Myamly’ means ‘sit down and talk’ in Wiradjuri and that is what the group does. However, the ‘talk’ has led to some amazing achievements. If we were to include all of the accolades and kind words that her community included in their nomination this biography would continue for pages. What we can say is – Sr Kerry is an inspiration, a friend and a living example of kindness and compassion and is very deserving of the non Indigenous 2021 NATSICC Service to Community award.

Across Australia there are members of the Clergy and Religious Orders that have walked alongside our people for a very long time. In 2021, NATSICC is very pleased to honour 3 of these people that have committed their lives to Christ and the wellbeing of First Nations people. 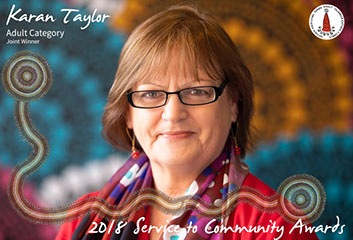 Designed to recognise the unheralded and share the gifts that Aboriginal and Torres Strait Islander people bring to the Australian Catholic Church, NATSICC was blessed with an abundance of quality nominations from every State and Territory. Stories of people working in communities for over 30 years were common as were young people going above and beyond to support and inspire their people in the development of faith and culture.

The Awards started in 2018 and we have had many worthy winners since then.